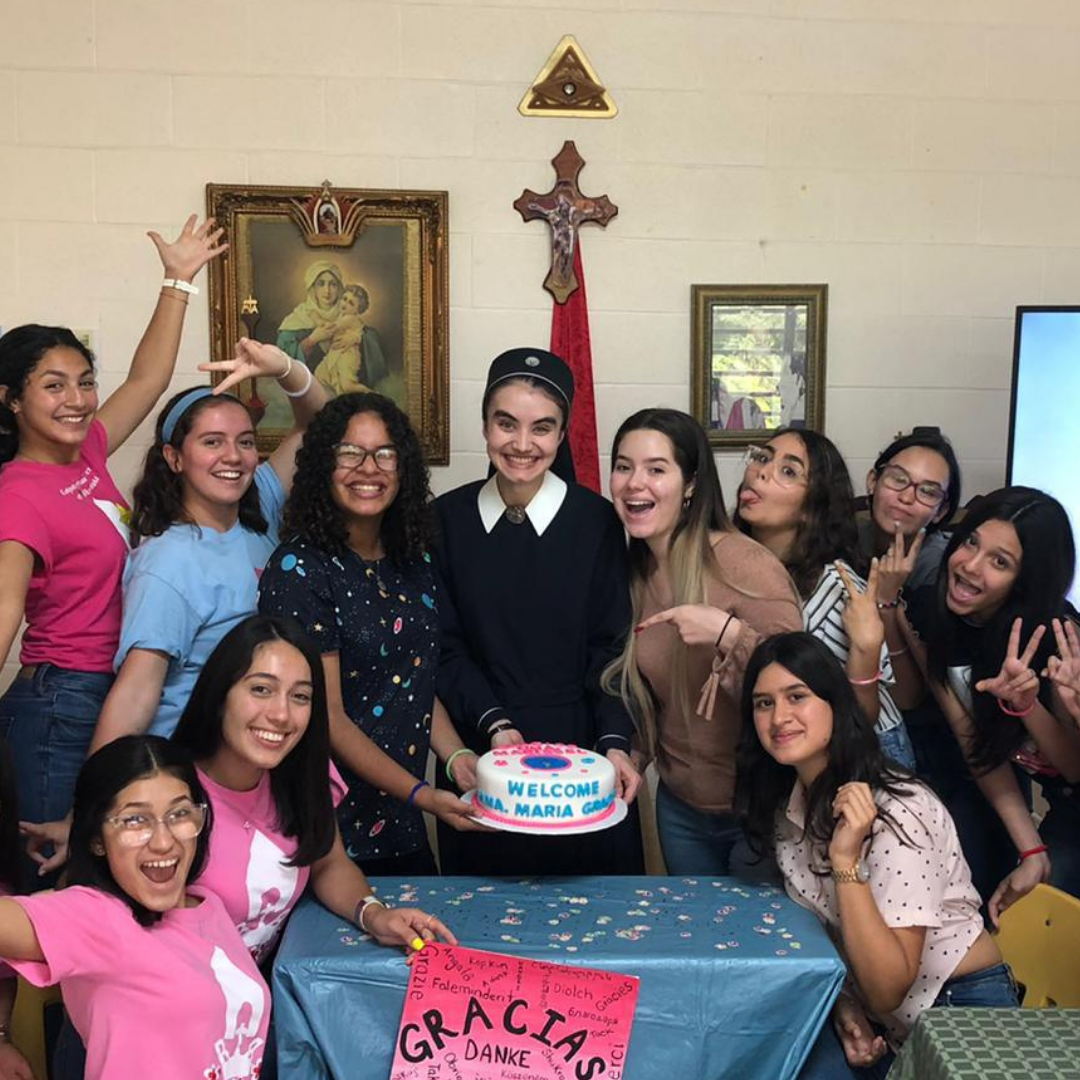 Sister María Gracia Dedinsky was born in Wisconsin, USA, and she joined our community in 2016. Close to a year ago, she was transferred to our house community in Cabo Rojo, Puerto Rico, where she currently works as moderator of the Schoenstatt Girls and Young Women’s branch of the Schoenstatt Movement. She shares a little of what it’s like to witness the grace of solidarity from the Schoenstatt Shrine there.

A Wisconsinite in Puerto Rico… Is that a melted snowflake? For a Schoenstatt Sister of Mary, it means anything but that: a new experience of a new culture, a new opportunity to get to know our Sisters’ family in a new place, a new mission from the Father, a new chance to give all for his kingdom, and a new home. One of the most beautiful things about our community is our internationality. It does not create borders that isolate (even when covid restrictions impede much travel!). Rather, it has a diversity that enriches and leads to a unity of hearts and tasks through a deeper appreciation of what makes the other and her culture unique. The experience of mutual understanding between cultures, generations and personalities can be a challenge for any group of people. In our community, it has become a rich blessing that gives one a home, even (and especially!) on the “Island of Enchantment” so far away from Wisconsin cheese.

From the Shrine of Solidarity

This unity in diversity brings about a climate of solidarity among one another in community, with the Father, and – in him – with all of God’s children. Here in Puerto Rico, most of our sisters live in Cabo Rojo, on the southwestern point of the island, and have the privilege and responsibility to be custodians of our national Schoenstatt Shrine, the Shrine of Solidarity. The solidarity and home that we experience despite our differences is the same special grace our Mother and Queen wants to give to all those who visit her here at this place of grace.

It is also our responsibility and our longing to be her instruments so that this grace may reach many, many hearts, even and especially during the pandemic. “Necessity is the mother of invention!” And the love of Christ that urges us is an invitation for creativity. Online retreats, conventions, summer camps, times of adoration, monthly covenant renewal, group meetings and trainings for members of the Schoenstatt Movement, recorded/live singing, and live-streamed holy Masses have been some of the fruits we have been able to offer from our Shrine of Solidarity over the past year. Countless positive and grateful echoes only confirm: The graces that God wants to pour out on the world through the hands of his Mother from our Schoenstatt Shrines can reach hearts – even over Zoom and Facebook live!

One such event with which I was privileged to be able to collaborate was a celebration convoked by the leaders of the various women’s branches of the Schoenstatt Family here in Puerto Rico. December 8, 2020, marked 100 years of the first Schoenstatt consecration to Mary by two women (what we would now call their “covenant of love”), which resulted in the founding of the women’s branches of the Schoenstatt Work. Here in Puerto Rico, our online celebration via Zoom was attended by 70-80 women between the ages of 15 and 80-something, representing the Women’s Federation, the Women’s League, the Mothers’ League, the Schoenstatt Girls and Young Women, and the Sisters of Mary.

It was a true experience of solidarity from all corners of our little island between individuals, branches, and generations. The young ones stood in admiration of the faithfulness of the older generations and imagined themselves together doing the same in 30 or 50 years. The older ones received new life and vigor from the youth and commented how much hope for the future their young presence brings.

Our celebration began with a brief introduction inviting the women to gratefully remember or “place anew into our hearts” the past 100 years of women in Schoenstatt, and renew our commitment of faithfulness for the next 100 years. A brief inspiration by one of the leaders of the Schoenstatt Mothers set all hearts on fire with the conviction: I am a Schoenstatt woman – today, here, now! The climate of solidarity prevailed over the scheduled “break” – and each branch provided a representative to lead a decade of a spontaneous rosary, complete with songs and short reflections in between each mystery. Afterwards, Sister M. Nancy, one of our sisters who is a professor of biotechnology at the Pontifical Catholic University of Puerto Rico, shared her testimony as a woman whose life has been formed by Schoenstatt, and it was a real hit.

Then it was time for holy Mass, live-streamed from the Shrine of Solidarity. After Holy Mass, the representative from the Women of the Federation gave a closing impulse, and to close, all prayed together a renewal and sending out prayer – promising their faithfulness and their striving for the second century of women in Schoenstatt. The atmosphere was so beautiful that no one wanted to leave the shrine. I left the camera with a playlist of songs in the background, and when I came an hour later to turn it off, the very last ones were still connected. (To watch a short video that was made for the celebration, click here.)

It’s in the Little Things!

It’s not a matter of great things that make a difference, but what we can give on to others through the little things. The heart of today’s human being, especially of woman, needs the atmosphere of solidarity and the experience of a home in order to be able to give this experience on to others. And the more one gives, the more one receives. Having given everything, I really feel that I have received much more than I deserve, and I am so grateful to be able to continue being an instrument so that the Mother Thrice Admirable, Queen and Victress of Schoenstatt may give on the grace of solidarity to many others, especially during this time in which the world needs it most.