“All Good Things Come in Threes” 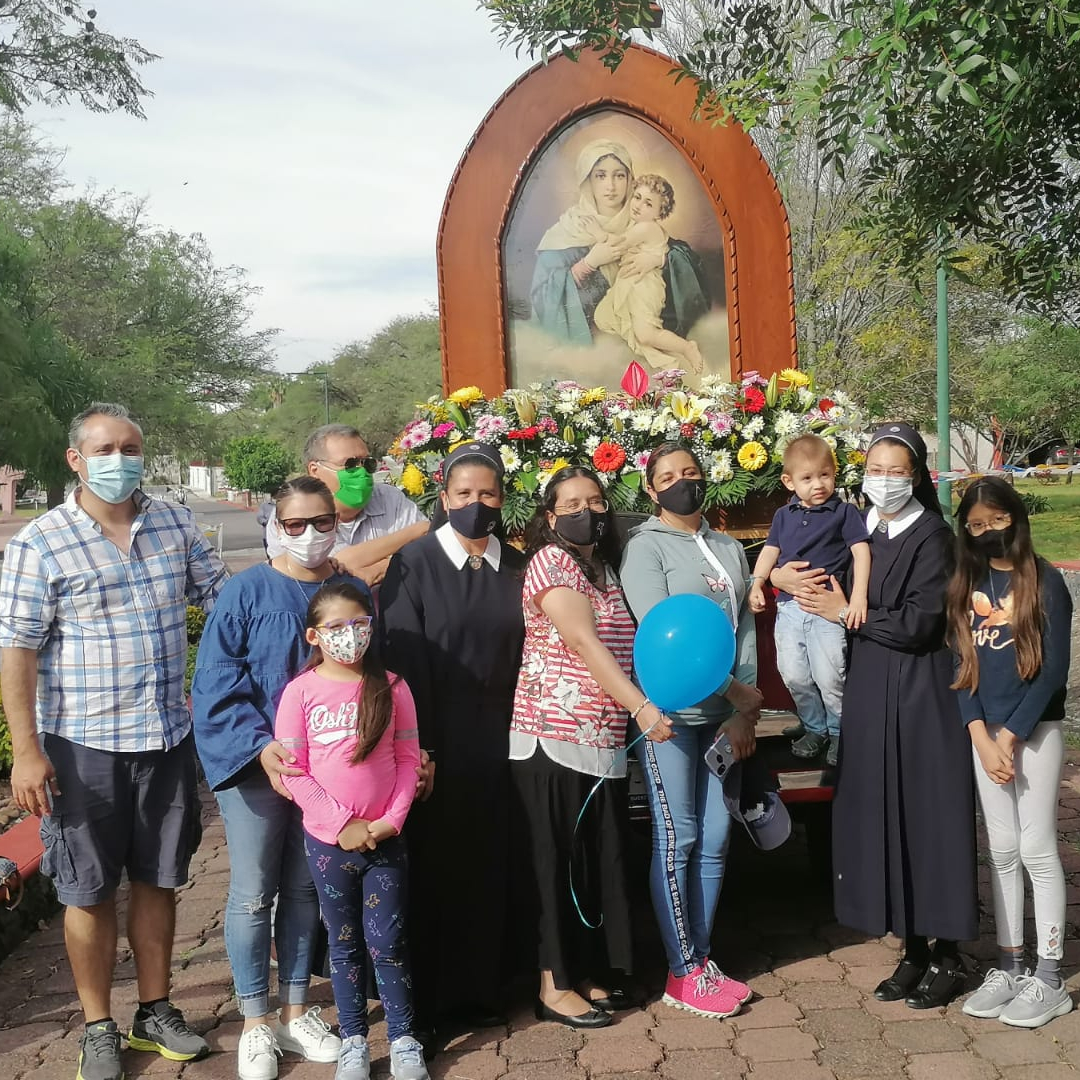 In this regard, Mexico cannot be left behind. The Schoenstatt Family in Mexico knows how to celebrate “in threes” – three days of the “Shrine Fiesta” to celebrate Schoenstatt’s founding and the covenant of love. This year, in spite of the pandemic and its restrictions and changes of scenery, we were allowed to host more pilgrims than last year.

The long-awaited Shrine Fiesta began on Saturday, October 16. From the earliest hours of the morning, the Blessed Mother prepared to receive her first visitors, the “Madrugadores” (“Early Risers”) – a group of men who visit the Blessed Mother in the shrine one day each month at 7:00 a.m., joining in prayer at holy Mass.

During the day there were several Eucharistic celebrations for different groups. At 11:30 a.m., about 15 young men from Regnum Christi arrived on pilgrimage with two priests, Father Esteban, LC, and Father Camilo, LC. With flowers in their hands, youthful enthusiasm, and the desire to come closer to God, they began the holy Mass. At the moment of the offertory, they presented their flowers and petitions to the Blessed Mother.

At 4:00 p.m., six couples from Monclova sealed their covenant of love with the Mother Thrice Admirable in the shrine. To end the day on a high note, we had holy Mass at 6:30 p.m. with the closing of the novena in preparation for the fiesta, which was preceded by a pilgrimage with the large Pilgrim Mother carried by car. The celebration concluded with the crowning of the MTA as “Queen of Courage and Hope.”

On Sunday, October 17, we were all looking forward to what the day would bring. The program included four Eucharistic celebrations and the blessing of the shrine door, which had been changed so that it could open wide and make it easier for pilgrims to see the inside of the shrine. The design on the top of the door symbolizes the mission of the “Faithful Heart of the Church” Shrine in Guadalupe land.

The Vicar of Consecrated Life from the Diocese of Querétaro, Father Saúl Ragoita, came on behalf of the bishop to celebrate the 12:30 p.m. holy Mass and bless the new door of the shrine.

These were moments of great joy for everyone, and above all, moments of encounter with God and the Blessed Mother. A total of 2,819 pilgrims visited the shrine on these two festive days. Among the testimonies of the pilgrims who came to the shrine, there was one in particular that touched me. A young father of a family had the novena in honor of the Blessed Mother in his hands, and when I met him on the path leading to the shrine, he asked me with great interest about the decorations and all that was going on. I told him briefly what it was about and he answered me with tears in his eyes: “I will come again tomorrow – I have much to thank the Blessed Virgin for. Just today I finished praying the novena. I asked her to intercede for a very big intention and on this very day I received an answer.”

Many pilgrims come to the shrine with their intentions, carrying bouquets of flowers in their hands to thank the MTA for the favors they have received.

October 18: Renewing the Covenant of Love

As the Schoenstatt Family of Querétaro, we closed the Shrine Fiesta on Monday, the 18th, celebrating the covenant of love as a family around our “Faithful Heart of the Church” Shrine. About 400 Schoenstatters were gathered to renew our covenant. Father Efraín of the Schoenstatt Diocesan Priests presided, accompanied by our three Schoenstatt Fathers: Father Guillermo, Father Alejandro, and Father Pedro Pablo. Father Laureano, also a diocesan priest, heard confessions.

The celebration and covenant renewal had a very special touch. The Schoenstatt Sisters of Mary had prepared a little surprise for everyone in attendance. Each Schoenstatter was given a little piece of wood from the first door of the shrine, which had already been designated a Holy Door three times.

Everyone was very touched. “Sister, you do not know what this means to me,” and “Sister, this is a treasure,” were some of the spontaneous comments that were heard.

The atmosphere was very family-like under a starry sky and the lights of the shrine illuminating the night. As good Mexicans who know how to celebrate, a mariachi band came to sing to the Blessed Mother and to delight the public as a closing of our three-day celebration.

Among cheers, songs, laughter, and shining eyes because of such beautiful experiences, we ended the day filled with the fire of love that burns for Schoenstatt’s mission. Viva la Mater! Long live the MTA! These were the shouts of the Schoenstatt children on Mexican soil, who know how to celebrate their Queen.