In Thanksgiving for the Life of Sister M. Helma 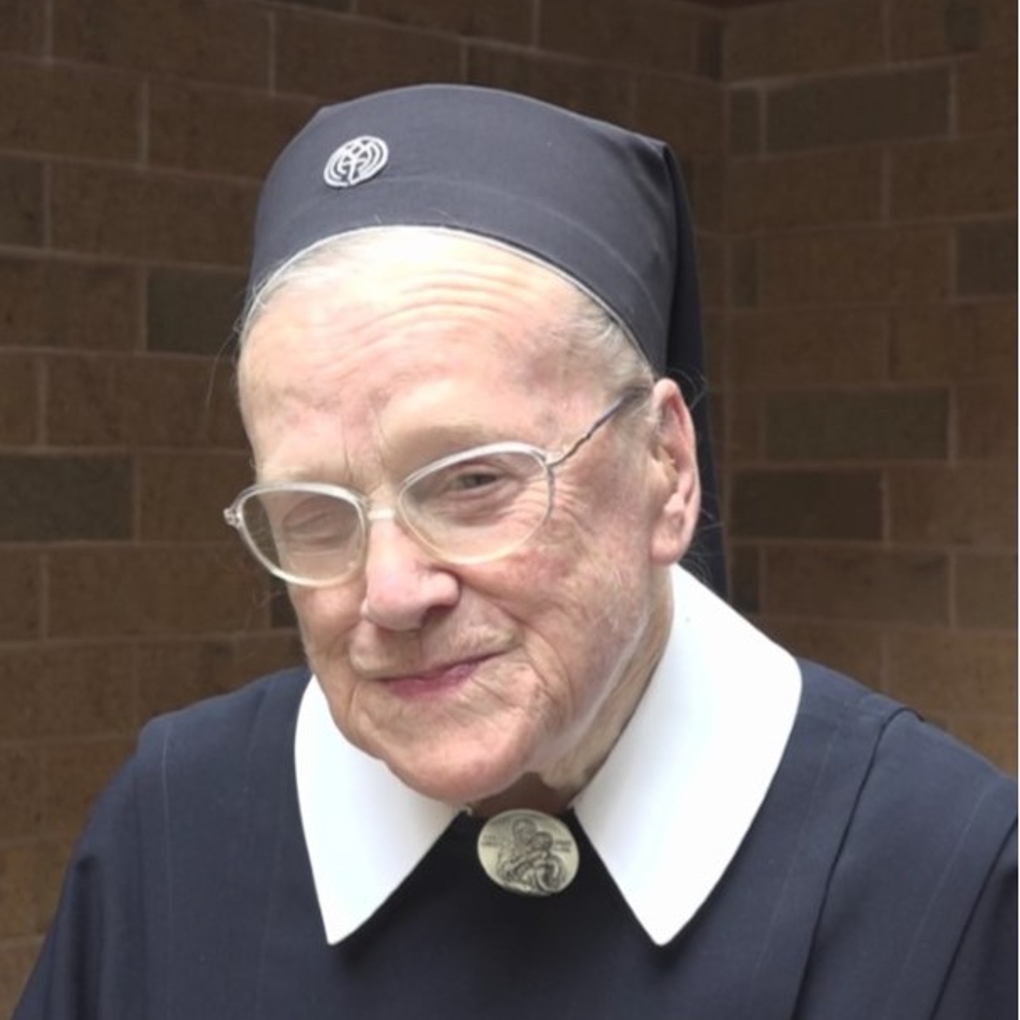 On January 17, the eternal Father called our dear Sister M. Helma Mueller home into eternity, just three days after her 101st birthday. She was one of the last two remaining pioneer sisters of our North American Province and is deeply treasured by those who knew her as a special jewel of the province.

Sr. M. Helma was born on January 14, 1921, in Herishäusern near Tettnang in the diocese of Rottenburg, Germany. She grew up in a Catholic farm family with two sisters. She also had one brother who died in the war. After attending seven years of grade school, she helped on the family farm and also took a course in shorthand and typing. The character reference given by the pastor before her entrance into our community offers a glowing description of Sr. M. Helma as “free from all false piety, peaceful and with a healthy judgment, deep and energetic. Her entire being is plain and simple; in her relations with others, she is extraordinarily compatible and always ready to help. Until now, as the eldest daughter, [she] has had to help on the family farm; otherwise she could have gone to study because of her abilities. … I can only recommend her.”

Sr. M. Helma entered the Schoenstatt Sisters of Mary in May 1946. She celebrated her solemn reception, in which she received her Marian dress, on December 19, together with 95 other novices.

Sr. M. Helma was one of the eight original pioneer sisters who came to Madison, Wisconsin in November 1949 to help fulfill Father Kentenich’s wish for Schoenstatt’s growth in the United States. The beginning years of her missionary experience were spent in the Queen of Apostles Pallottine Seminary, where she helped in the kitchen, laundry, and sacristy, and struggled to learn the English language. Sr. M. Helma’s talents in the kitchen were soon discovered and appreciated.

From the beginning, Sr. M. Helma took on a natural leadership role among the sisters due to her authority of being, and she served as house superior in several different houses over the years. In 1978, she was appointed provincial superior, a position she held until 1991. This entire period was one of great development in the province – in numbers, in breadth, and in spiritual depth. The present provincial house in Waukesha, WI was designed and built under her direction, and ever since her term as provincial superior ended, she lived in it, fulfilling various tasks until the last few years when her mental and physical strength gradually diminished.

Sr. M. Helma highly valued the virtue of faithfulness. In all her years as a superior and as provincial superior, Sr. M. Helma cared for the sisters entrusted to her in a warm but objective way and tried to lead them to genuine holiness, most of all through her example.

A Woman of Few Words, but of a Radiant Being

Indeed, Sr. M. Helma was not a woman of many words. She shied away from being the center of attention, but she was genuine as gold, and deeply loved and esteemed. Fr. Kentenich once said that Sr. M. Helma had a golden heart, and many sisters testify to this from their own experience of her. Sr. M. Helma also had a dry, quick sense of humor, which she maintained even as she grew older. It was the special honor and joy of the sisters working in our health care wing to take care of Sr. M. Helma. In the last years of her life, she was bed-ridden, but she was ever a docile, quietly joyful patient who radiated peace and a spirit of simple surrender.

We give thanks for the gift of Sr. M. Helma’s exemplary life of faithfulness and total commitment to Schoenstatt and to our community. After a richly blessed life of more than 100 years, we may offer her to the Heavenly Father as a precious gift. May she rest in peace.