Recrowning the Queen of Unity 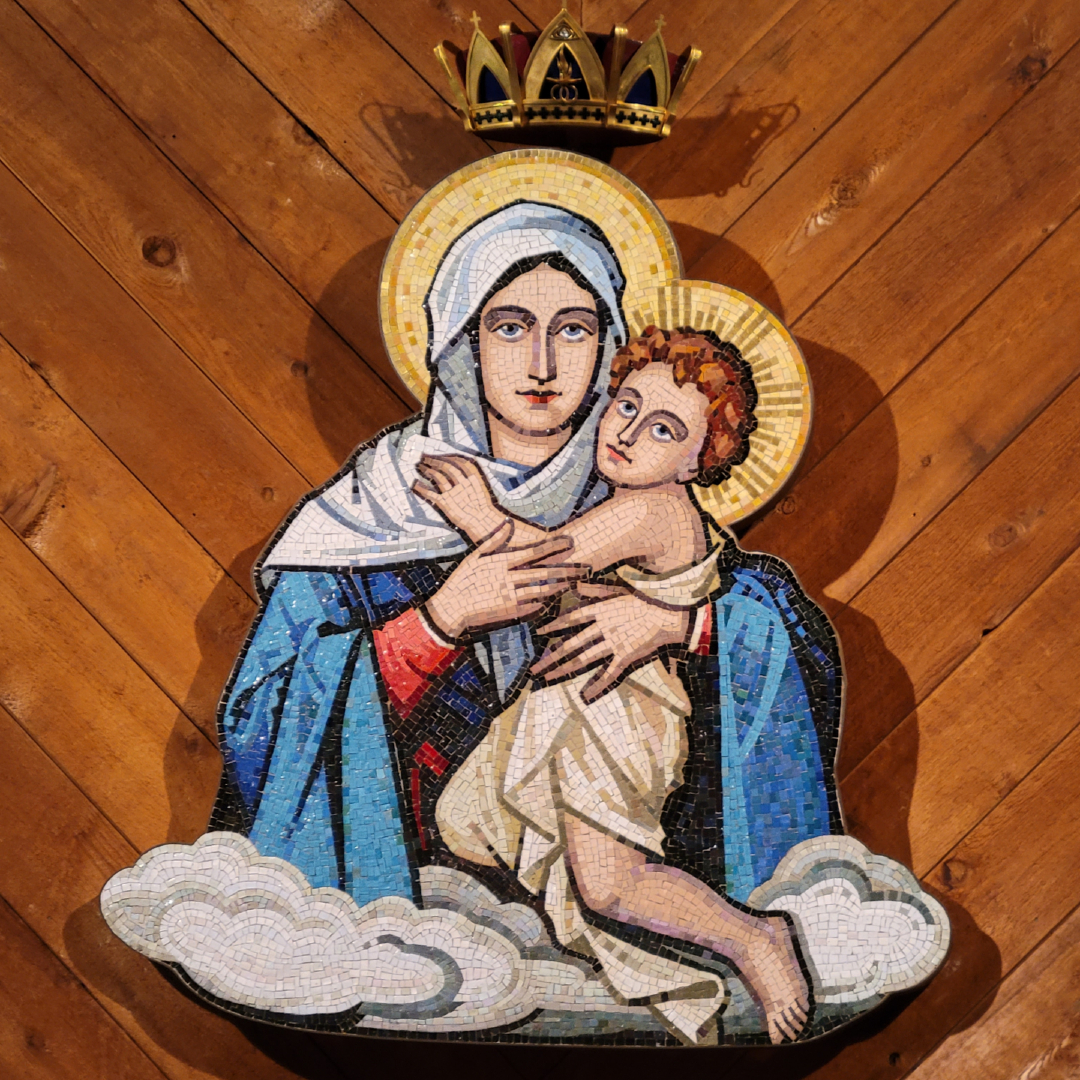 Crowning the Blessed Mother is something that we tend to see happening in the month of May. However, with the feast of the Queenship of Mary, on August 22, the Church reminds of the value of honoring the Blessed Mother by placing a crown on Mary’s statues and pictures anytime we consider it appropriate. Inspired by the practice of Father Joseph Kentenich, the founder of Schoenstatt, we give Mary a crown whenever we are in great need and connect such acts with a special petition.

On August 22, 2021, the Schoenstatt Family of Wisconsin and Illinois commemorated fifty years since the icon in the house chapel of the retreat center was crowned for first time as Queen of Unity, on August 15, 1971. Given the fact that this title speaks to the longing for healing amidst divisions in our culture, we saw the providence of God behind this event. Therefore, members of the Schoenstatt Movement from both states spiritually and physically gathered at the International Schoenstatt Center in Waukesha to once again place the crown over the icon of the MTA and proclaim her Queen of Unity.

History and Title of the Queen of Unity

Before holy Mass, we learned about the history and title of the Queen of Unity. This was the title given to this icon already fifty years ago, inspired by the remarks from the founder on the internationality of the groups which gathered here at the Schoenstatt Center. For example, he once mentioned how “we should grant one another freedom to develop and still have a strong unity, the unity of a great Marian and apostolic family…” By this he meant that “an International Center should also unite an international family” (1967).

Gifts of Love for the Queen

Nothing can unite us more than our love for God, as well as our faith and hope in him. The fact that we came together to give this crown to the MTA gives proof of this. In preparation for the ceremony, we had the opportunity to write down our gifts of love for our Mother and Queen and place them in the jar of the capital of grace. We even had the chance to learn how to sing our year’s motto, a phrase that inspires the Schoenstatt members throughout the year. The slogan reads: Lead from the shrine, with trust in Divine Providence and charity to all! The priests offered the holy Mass for the repose of the soul of Andy Horn, who passed away a few days prior to this celebration. All gifts of love for our Queen!

Father Pushpa, Schoenstatt Fathers, Father Robert, Schoenstatt Diocesan Priests, and Deacon Henry Reyes, Archdiocese of Milwaukee, were our celebrants. In his sermon Father Pushpa emphasized the gift of unity and the type of efforts we need to make in order to attain unity. The title Queen of Unity could not be more relevant today than fifty years ago. Many voices want to tear us apart as country, family, and Church. “These voices could even fragment us interiorly as individuals if we do not remain strongly bonded in our covenant with the MTA and deeply united to God, our Father,” we prayed in the crowning celebration.

After the communion prayers, while singing the litany to the Mother Thrice Admirable of Schoenstatt, the priests and a group of the faithful took the crown in procession through the house to the house chapel of the retreat center. In the meantime, all those who remained in the Father Kentenich Hall were able to view the event on the screens and participate real-time in the crowning ceremony.

The crowning prayer made a deep impact on everyone. With childlike confidence we addressed the Queen:

We trust that you will answer our needs with your motherly power.  You have been with us during these difficult times. Remain with us and heal the divisions within our Church, our nation, neighborhoods, and families. Take our families under your protective mantle.  Change our hearts so that this time of darkness will soon be transformed into an inbreak of the divine, an inbreak of grace into our time, into our Church, our nation, and our families.

In a deeply prayerful atmosphere, the queen was crowned by Father Pushpa, who climbed up the long ladder next to the icon to fasten the crown above the head of our MTA. Everyone held their breath when Father Pushpa took the last step to be eye to eye with the large mosaic. Everyone intensified their prayers at that point. After a sigh of relief when we saw that the crown was in place and that Father Pushpa was safely coming down the ladder, we applauded and prayed.

Procession to the Shrine

After the coronation the group that came from the house chapel and the group that was in the Father Kentenich Hall came together outside on the road and walked in procession up to the shrine for the renewal of the covenant of love. Deacon Reyes directed the prayers in the shrine, in English and Spanish. All the contributions to the capital of grace which were collected before Mass, as gifts of love for our Queen, were burned as we sang “My Queen, my Mother.”

With songs and by paying a visit to the shrine, we concluded a beautiful Covenant Sunday experience. May our Queen of Unity intercede miracles of unity for us and help us bring about a fruitful work of unity, in our families, in our Church, in our world!