We Have Gained a Faithful Intercessor before God 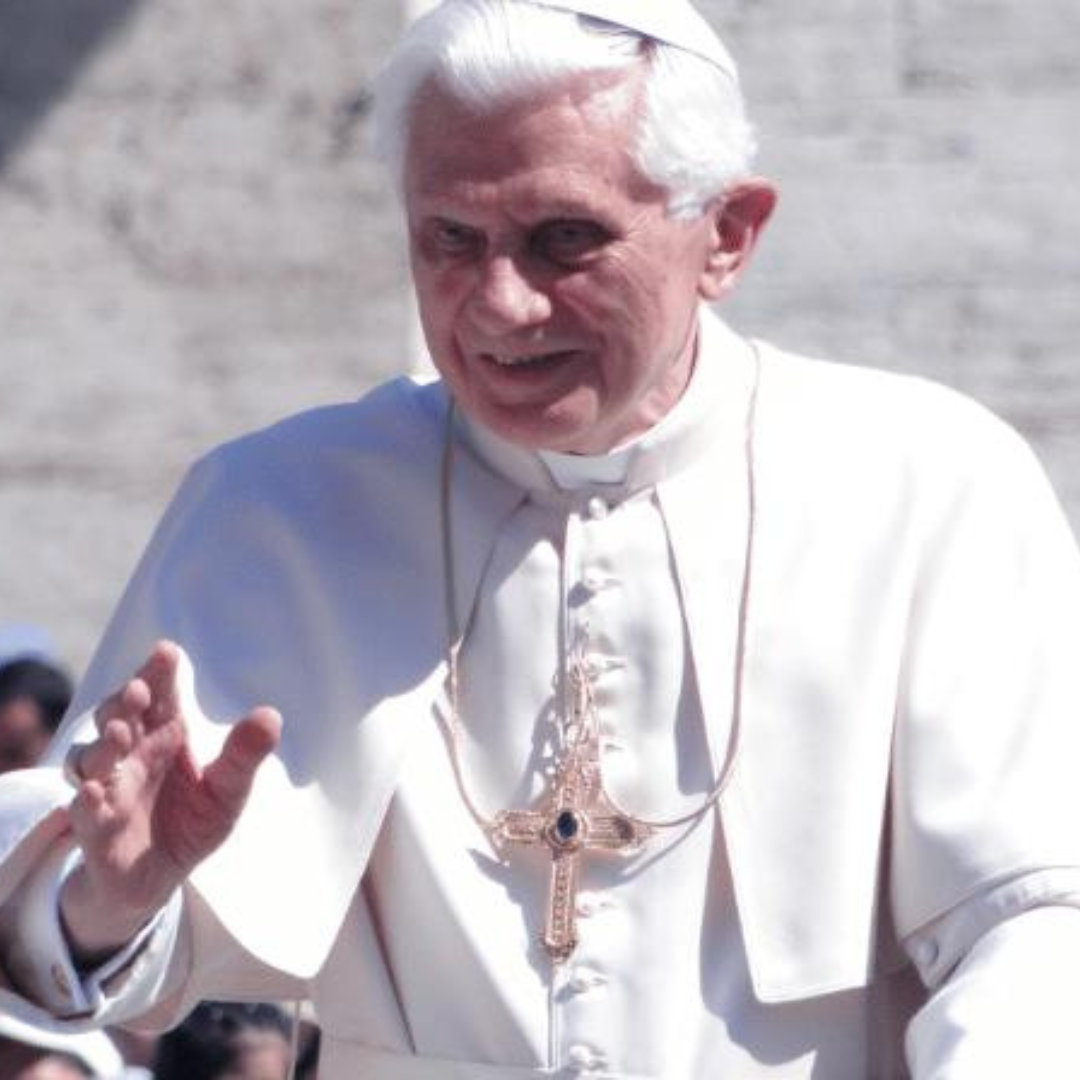 Pope Benedict has passed away. We as Church mourn him. He was a very special and close friend to Schoenstatt. He appreciated our charism and mission for the Church, accompanying us in a fatherly way and feeling very much loved and supported by us. Here is a brief review of that fraternal relationship between Pope Benedict and Schoenstatt.

Today we have gained a faithful intercessor before God. Pope Benedict XVI ends his mission on this earth to continue it from heaven. His pontificate lasted from April 19, 2005, the date of his election, until February 28, 2013. Together with the whole Church, we express our gratitude for his life consecrated in love for the Church.

Since the time of Cardinal Joseph Ratzinger of Bavaria, he already knew about the Schoenstatt mission and there are many, many stories that could be told about it. But we will highlight just a few. Perhaps they are not the most important events, but they show the closeness of Pope Benedict XVI to the Schoenstatt Family.

THE COVENANT SEALED BY FATHER KENTENICH

Cardinal Ratzinger was close to the Schoenstatt Family from the time he lived in Germany. When he moved to Rome, a Sister of Mary was his secretary and he visited Schoenstatt in Germany, he prayed at the Original Shrine, visited Fr. Kentenich’s grave and presided a Holy Mass there.

In 1985, when the Schoenstatt Family celebrated the centenary of the birth of the founder, Father Joseph Kentenich, Cardinal Ratzinger said in a homily:

“In the midst of great conflict between the powerful, this event, the Covenant that Joseph Kentenich sealed was something invisible, insignificant, a private matter. It seemed that nothing could change the way the world had begun to destroy itself. But from this very Covenant grew something that was alive, … the Family of Jesus Christ beyond the borders of those who were threatening each other, a Family that expanded throughout the world weaving a network of love, a network of good, beyond borders”.

As Prefect of the Sacred Congregation of the Faith, Ratzinger maintained this contact, he visited the Cor Ecclesiae Shrine in Rome a few times for personal prayer and presided many Holy Masses there. In 2005 he was elected successor of Peter and chose the name Benedict XVI.

BLESSING OF THE MTA PICTURE FOR THE Shrine

In 2007, when he came to Brazil, the picture of the Mother and Queen for the Shrine of Jacarezinho/PR, was at the entrance of his residence in the Monastery of St. Benedict. On May 10, at 2:00 p.m., he blessed it.  Divine Providence is amazing: the Shrine that was to be the destination of this image is located in the city where the first 12 Schoenstatt Sisters of Mary had settled when they arrived in Brazil on June 10, 1935. A month before, precisely on May 10th, the same date on which the picture was blessed, Father Joseph Kentenich had given them their sending forth message, in which he indicated to them the mission of taking the Schoenstatt message to the new world and going out willing to be seeds, taking the cross and the Shrine with them.

During this visit more than 500 Schoenstatters dressed in their distinctive yellow t-shirts accompanied Pope Benedict on almost all his trips through the state of Sao Paulo. The motto they always chanted was: “Pope Benedict, Schoenstatt loves you!” At each location, he even sought them out in the crowd and greeted them, attracting the attention of the media at the time.

BLESSING OF THE FATHER SYMBOL

The following year, in 2008, the Sisters of Mary enthroned the Father Symbol in the Cor Ecclesiae Shrine of the Mother and Queen in Rome, and they participated on November 19, in large numbers, at an audience in St. Peter’s Square, standing in a place highly visible to Pope Benedict XVI. When they were mentioned by name, they greeted the Holy Father with joy and enthusiasm. At the end of the audience, the Holy Father addressed the group of Sisters. Monsignor Zimmerer, Director General of the Sisters at the time, and Sister M. Jacoba, Superior General, showed the Pope the Father Symbol and spoke to him about the celebration of the enthronement of the Father Symbol in the Cor Ecclesiae Shrine. The Holy Father learned about the celebration, and, with much joy and deep interest, he contemplated the symbol and blessed it. Monsignor Zimmerer and Sister M. Jacoba thanked him and promised him that they would pray for him.

A SPECIAL GIFT FOR THE SHRINE

Subsequently, on October 22, 2010, Pope Benedict XVI sent a white chasuble with his pontifical coat of arms embroidered on the back as a gift for the 20th anniversary of the blessing of the Cor Ecclesiae Shrine. This was his way of sending congratulations to the Sisters on the celebration of the Shrine, which belongs to his diocese of Rome. He sent photos and rosaries to be distributed on the celebration day, expressing his delight in the existence of this place of grace which he had visited so many times.

He also visited the Mater Ecclesiae shrine in Belmonte as Cardinal. He was the first pilgrim to arrive there after its inauguration and blessing. Then, when he met with Msgr. Gino Reali, bishop of the region, or with Msgr. Sanna, he always asked: “How are the works in Belmonte going?”

THE BLESSING OF THE CROWN

On August 22, 2012, Pope Benedict XVI blessed the crown with which, on September 8, 2012, the Auxiliary Pilgrim Mother of Europe was crowned as “Queen of the New Evangelization” in Schoenstatt. On the day he blessed the crown, he “sent a message” to the missionaries of the Pilgrim Mother Apostolate from his general audience at Castel Gandolfo: “The title of ‘Queen’ is a title of confidence, of joy, of love. And we know that she, who partially holds in her hands the fate of the world, is good, loves us and helps us in our difficulties…. Looking at her, let us emulate her faith, her full availability to God’s plan of love, her generous acceptance of Jesus”.

In addition to his words of 1985, quoted above, Cardinal Ratzinger, and later as Pope Benedict XVI, spoke many times about Father Joseph Kentenich. On September 18, 2010, a congress was held in Portugal, organized by the Secretariat for the beatification of our founder, with the motto: “In Covenant with Father Kentenich, on the way to his canonization”. A message from Pope Benedict XVI was read, giving his blessing, wishing that the congress would be very blessed.

In the prologue of a novena for the beatification of Father Kentenich, he wrote:

POPE BENEDICT AND OUR “SAINTS”

We also recall the numerous appointments of Schoenstatters to tasks of great responsibility in the Church and the beatifications and recognitions of heroic virtues:

Father Hirschfelder was proclaimed blessed “martyr and witness to the faith” in 2010, following the analysis of the Congregation for the Causes of Saints and the approval of Pope Benedict XVI.

On December 10, 2010, a papal decree recognized the martyrdom of the German priest Alois Andritzki, who died in the Dachau concentration camp in 1943. His beatification took place on June 13, 2011, in Dresden (Germany).

On May 10, 2012, Pope Benedict XVI acknowledged the merits of Sister M. Emilie’s heroic virtues. Now the Church invokes her as “venerable”, that is, a sign that calls for veneration and imitation.

For all this and much more, we have not lost a Holy Father on earth, but we have gained a holy friend and intercessor in heaven. We thank Pope Benedict XVI.