The “Little Hour” of Bethlehem 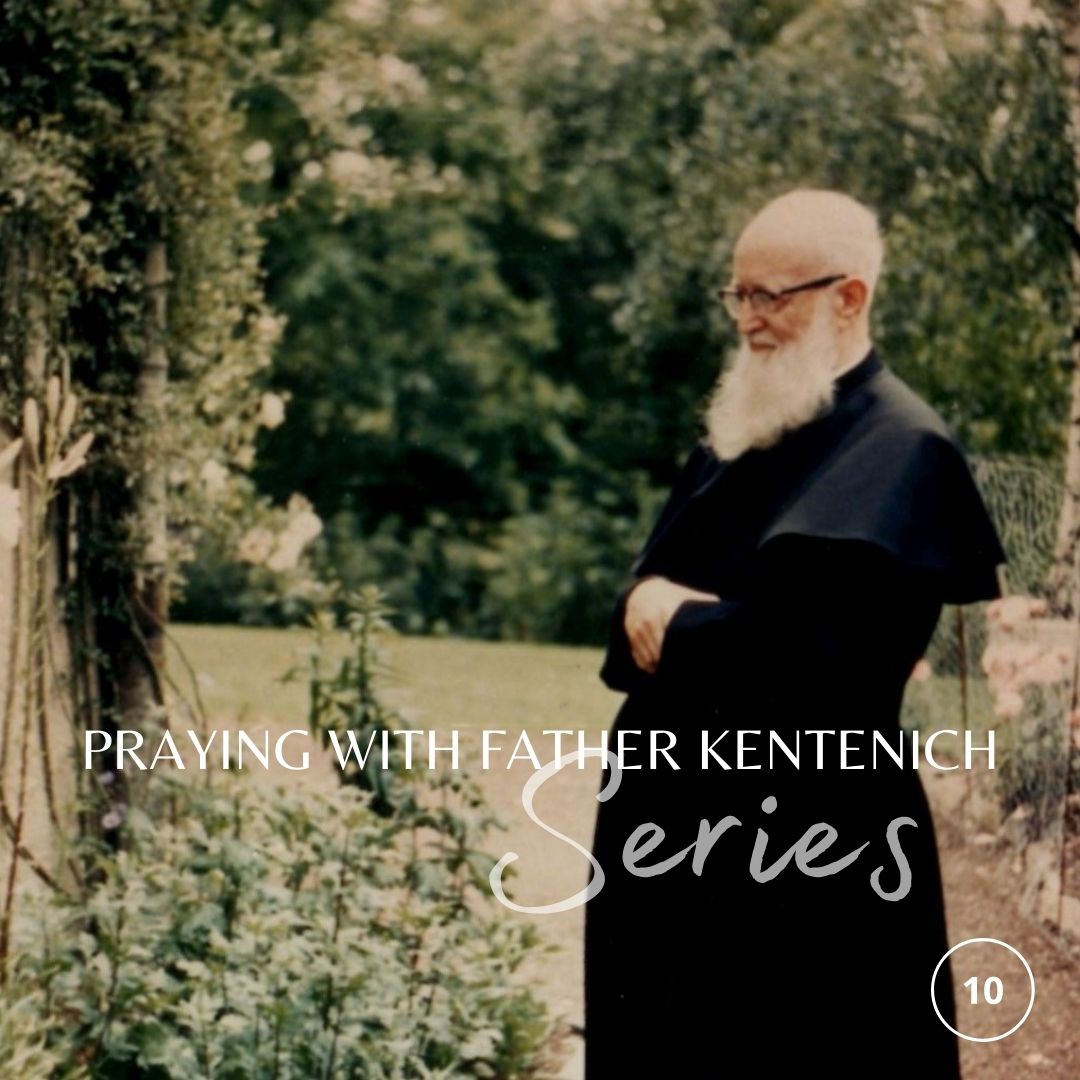 As we approach this beautiful Christmas season, our “Praying with Father Kentenich” comes alive through a prayer from the Schoenstatt Office contained in the Heavenwards prayers:

“Your shrine is our Bethlehem,

pleasing to God through its sunrise.” 1

These are the opening lines of the Lauds or three a.m. prayer of the Schoenstatt Office from Heavenwards, a prayerbook written by Father Joseph Kentenich, founder of the Schoenstatt Movement, during the time of his imprisonment in the Dachau concentration camp. On September 20, 1941, Father Kentenich was arrested by the Gestapo and imprisoned in their prison in Koblenz, Germany. This event was soon followed by the decision to send Fr. Kentenich to the Dachau concentration camp. The transport took place on March 11, 1942, and he arrived in Dachau on March 13.

Jonathan Niehaus describes the deep significance of this time for Fr. Kentenich, as well as for the entire Schoenstatt Movement: “The difficulties did not lead to despair. . . . Rather a new and deepening spirit of being an instrument in the hand of God the Father began to develop.”2 A prisoner in Dachau for over three years (he was released on April 6, 1945), Father Kentenich “not only survived the brutal and inhuman conditions of the concentration camp, . . . but initiated an active apostolate among his fellow prisoners, especially among the priests.”3

“The Spirit of Dachau in Prayers”

At the urging of these priests, Father Kentenich “began to express the spirit of Dachau in prayers.  It was a spirit that defied the diabolical atmosphere of Dachau. That a rich spiritual life could grow in Dachau at all was a sign of divine activity, and the prayers were a way to foster the awareness of God’s guiding hand.”4

An Active Dialogue of Love with God

Father Kentenich’s desire was that Schoenstatt members would make their day an active dialogue of love with God, just as Mary did. Growth into this way of living is a dynamic, life-giving process, characterized by our consecration to the Mother Thrice Admirable Queen and Victress of Schoenstatt. As Father Kentenich taught us, we want to live the hours of the day in union with Mary our Mother. We do this by living out our vocations in everyday life and by making spiritual visits and (to the extent that we can) physical visits to the Shrine of our Mother Thrice Admirable Queen and Victress of Schoenstatt.

The Liturgy of the Hours

In the tradition of the Divine Office, or Liturgy of the Hours, commonly called the breviary, (the official set of prayers used by the Latin rites of the Catholic Church to sanctify the day), Father Kentenich developed his prayer hours of Matins (midnight), Lauds (three a.m.), Prime (six a.m.), Terce (9 a.m.), Sext (noon), None (three p.m.), Vespers (six p.m.) and Compline (nine p.m.). He composed the prayers using Biblical references that draw us into our faith and then goes on to unfold how our faith is uniquely realized, by God’s guiding hand, in our Schoenstatt spirituality and history.

We want to enter into Father Kentenich’s 3:00 a.m. Lauds prayer, letting it speak to our heart and give direction to our lives.

Your shrine is our Bethlehem,

pleasing to God through its sunrise.

There you gave virginal birth to the Lord

who chose you as his Bride and Mother.

In your miraculous fruitfulness

You brought forth the Sun of Righteousness.

You have graciously established Schoenstatt

so that our times can see the Eternal Light.

From there you want to go through our dark world

as the Christ-bearer sent by God.

Jubilantly place the Lord into my sould anew,

So that, like you, I may perfectly resemble him.

Let me be a Christ-bearer for our times,

thay they may shine in the brightest radiance of the sun.

Glory be joyfully given to the Father

through Christ with Mary, highly praised,

in the Holy Spirit full of splendor

from the universe now and in all eternity. Amen.

“There You Gave Virginial Birth to the Lord”

In the first verse of this prayer, Father Kentenich focuses on the content of our faith through the Biblical image of Bethlehem:

There you gave virginal birth to the Lord

who chose you as his Bride and Mother.

In your miraculous fruitfulness,

you brought forth the Sun of Righteousness.

His image draws us into the intimate beauty, majesty, and simplicity of Christmas.  Just as the first sunrise lights up the horizon, so did the birth of the Christ Child light up the world. It was Mary who was chosen by God from all eternity to give birth to Jesus, the God-man. From the moment of the Annunciation to the birth of the Christ Child on Christmas, Mary’s fiat determined her life’s path. Her desire to give herself completely, to always say yes to God’s plan, allowed her to become the Mother of Christ while remaining a virgin. It was from Mary that Christ received his body. In virginal love, she became not only the mother but also the bride of Christ, his permanent helpmate and associate in the work of redemption.

“You Have Graciously Established Schoenstatt”

In the second verse, Fr. Kentenich unfolds for us how the fruit of the Incarnation and birth of the Christ Child is realized in our world today through Schoenstatt and its spirituality:

You have graciously established Schoenstatt

so that our times can see the Eternal Light.

From there you want to go through our dark world

as the Christ-bearer sent by God.

Schoenstatt is called to reflect the Eternal Light, Christ the Son, in order that, with Christ and Mary, all may find their way home to the Father God.

The Schoenstatt Shrine, a New Bethlehem

Father Kentenich saw the Schoenstatt Shrine as a new Bethlehem where people should find Mary with her infant child in her arms. From there Mary wants to give Christ to the world and Christ wants to go into the world from the Shrine. Here Mary, as Mother cares for us her children, forming and educating us into her image, as Christ-bearer, Christ bringer, and Christ server. This is achieved through our covenant of love with the Blessed Mother and the rebirth of Christ in our souls.

How the Guiding Hand of God Works

Let us not forget how the guiding hand of God, Divine Providence was working.  God used the reality of Christmas, the coming of the Christ Child, and all that that conveys to us about our faith, to answer the need of the time during the Nazi persecution in 1941. Father Kentenich, the founder and father of the Schoenstatt Family was in prison. A Schoenstatt Sister of Mary named Mariengard felt urged to strive for the freedom of the father and founder. She pictured Fr. Kentenich in the cold, dark prison cell in Koblenz, and on the night of December 23, 1941 decided to write a letter to the Christ Child, expressing her Christmas wish for his release. Her thought was that the superior would read the letter to the sisters so that her prayer for the “Miracle of the Holy Night,” the freedom of the father and founder, would be taken up by all the sisters. Instead, the letter made its way to Fr. Kentenich in prison, who would read it on Christmas Eve.

Father Kentenich, in his typical manner, first sought in prayer to discern what Divine Providence was telling him. Then he wrote his reply to Mariengard from his prison cell, which he hoped, would reach Mariengard on Christmas. Father Kentenich announced the birth of what he called the Mariengarten or Garden of Mary. The meaning and mission of the Garden Mary evolved over time during the time of persecution, taking on a very childlike character in imitation of the Christ Child, who as Son was a child before the Father God.

In the gathering of the Schoenstatt Family, called the October Week, taking place in 1950 he described the mystery of grace he believed God imparted to the Garden of Mary:  “It is a garden of little Marys, who carry Christ, who bear Christ, and in and through Christ constantly circle around the Father.”5

“Jubilantly Place the Lord into my Soul Anew”

In the third verse, Fr. Kentenich reveals to us how we can bring the meaning of Bethlehem and the virgin birth to life in our world today.

Jubilantly place the Lord into my soul anew,

so that, like you, I may perfectly resemble him.

Let me be a Christ-bearer for our times,

that they may shine in the brightest radiance of the sun.

The prayers of Heavenwards are not merely capturing a historical event from a spiritual perspective. They are a living reality and participation in the life of our Catholic faith that Fr. Kentenich wanted the Schoenstatt spirituality to preserve and deepen. This is achieved by each generation of the Schoenstatt family entering into the life and prayer of the father and founder, Father Kentenich, and seeking to make his words and his actions fruitful in their own lives, in light of the needs of the time.

Let Us Bring the Lord Anew into our Souls

Let us bring the Lord anew into our souls, through the reception of Holy Communion, through adoration, through increased prayer, through that particular personal striving in our own self-education that conforms us to the image of Christ and therefore transforms us into a little Mary, a Christ-bearer for others. Then the light and blessing of Christ will reflect from our being and our actions and, like Mary, we will bring Christ to the world and serve Christ in every person we meet.

The Garden of Mary

To those in our world that experience loneliness, a lack of the ability to enter into interpersonal relationships, or feel like they are not understood or appreciated, the Garden of Mary provides natural and supernatural relationships. To a world that takes on and promotes the distorted image of woman, the Garden of Mary forms womanly personalities, little Marys, who reflect the God-given beauty and integrity of body and soul. To a world that seeks to fragment our understanding of the human person, male and female, and the fruitfulness of their complementarity, the Garden of Mary keeps before our eyes the image of each person made in the image and likeness of God. Therefore, we pray:

Glory be joyfully given to the Father,

through Christ with Mary, highly praised,

in the Holy Spirit full of splendor

from the universe now and in all eternity. Amen.